For a brief time in 2003 I mistakenly thought the Yeah Yeah Yeahs were from , due to their mention in one of the earliest articles on Double Dagger in my hometown’s Citypaper. In truth, the prospect of Double Dagger and the Yeah Yeah Yeahs emerging from the same scene wasn’t terribly absurd. Back then, both were stripped down post-punk trios playing hardcore-damaged garage rock with a penchant for confrontational lead singer antics. But where the Yeah Yeah Yeahs have descended into major label mediocrity following the mainstream success of their “Maps” single, Double Dagger have only gotten harder, faster, louder, and better, and are finally getting the recognition they richly deserve.


Currently riding the wave of ’s thriving independent rock scene, Double Dagger is one of the most forward-thinking punk bands in the country, and one of the American independent scene’s best kept secrets. Formed in 2002 by graphic designers Bruce Willen and Nolen Strals, and eschewing guitar for the rumble and roar of a single overdriven bass, Double Dagger’s sound has evolved from thrashy yet clever garage punk into a hip, danceable, and catchy brand of post-hardcore, best heard on 2007’s full length Ragged Rubble, which has been praised in both the Washington Post and even on the somewhat punk-phobic Pitchfork. During an era where a number of British groups have turned angular punk into big business, Double Dagger offers the real deal. It’s a shot of much needed energy and originality into the arm of left-field rock and roll. 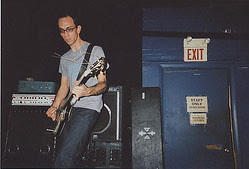 Its Double Dagger’s live show, however, where the band truly shines. Lead singer Nolen Strals chants and screams the lyrics as he jumps and contorts himself much like Cedric Bixler-Zalava did during his At The Drive-In years, although Strals adds humor and ironic sexuality into the mix by regularly venturing into the audience to cause consternation among its more fashion-conscious members. Wrangling sounds even more incredible than those on record, bassist Bruce Willen is only marginally more restrained than Strals, and drummer Denny Bowen (who replaced the energetic yet less technically skilled Brian Dubin in 2004), not only plays precisely, but with so much power that broken drum heads and other equipment issues are a typical occurrence. The sum of these parts elevate already hard-hitting songs like the Led Zep-gone-minimalist slam of “The Psychic,” the epic clash of hope and grief that is “Luxury Condos For The Poor,” and the tuneful frenzy of as-yet unreleased tracks like “No Allies” and “New Catalogues” to sublime levels. 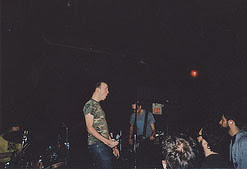 I had the chance to interview Bruce Willen via email recently, to gain some deeper insight into the band’s inspiration and plans for the future. Here’s what he had to say:

Rag: You've been getting a lot of press lately in publications like the Washington Post and Pitchfork. How have you been responding to this, and has it affected your ambitions in regards to the band?

Bruce Willen: It's always cool when someone writes nice things about your band or album, if for no other reason than to get some form of feedback on your music. The publicity we've received this year hasn't been overwhelming or life-altering, and it hasn't affected our plans or approach as a band. Hopefully it's given a few new people a chance to hear our music. 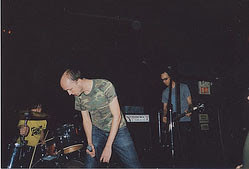 CUR: One of the most distinguishing aspects of Double Dagger is the absence of a guitar, and your bass work filling the sonic space that a lead guitar would take. Was this a conscious choice to play only the bass guitar, or did it happen by chance?

BW: When we were starting the band, we originally thought that we would have a guitar player. We weren't able to find someone who seemed to fit with the band's direction, so we wound up sticking with just a bass guitar. I had been experimenting with unorthodox bass set ups, and with the addition of some more amps we were able to fill out the sound enough so that a guitar wasn't necessary. It has been a challenge to write songs in a way that forces the bass playing to be dynamic and make up for the lack of guitar.

CUR: is a theme that plays in heavily in Double Dagger's music, especially in "Luxury Condos for the Poor," which to many is your signature song. What is your personal history with , and thoughts on living in general?

BW: Denny was born in and grew up in and out of the city. Nolen and I both moved to to go to MICA (Maryland Institute College of Art) and wound up sticking around after we graduated. My dad's family is from too, so I have some personal roots in the city. We all share a love and appreciation for the city. obvious has its share of problems (see The Wire), but it's a great place to live. It's a small community with big city amenities (and big city problems). 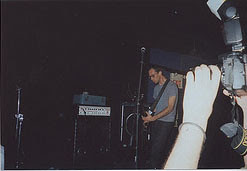 CUR: 's independent music scene seems to be enjoying its big moment in the national spotlight at present. What are your thoughts on music, and this recent phenomenon?

BW: We think it's great that the music scene is getting so much attention. People like Dan Deacon, Ecstatic Sunshine, Videohippos, The DeathSet, Celebration, etc are all making great music and work hard at what they do--- they absolutely deserve to do well. has a close-knit music community and everyone helps each other out and seems to be genuinely excited about each other's music. The music press will eventually move on to the next "cool" music scene, but as long as our sense of community isn't replaced by a desire for fame and fortune, will be fine. 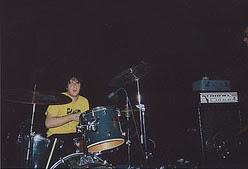 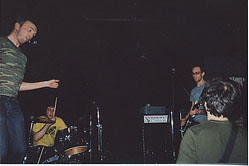 CUR: You and Nolen also comprise the graphic design team Post Typography. Can you explain in greater detail the work that Post Typography does and some of the accolades your work has received?

BW: Nolen and I started Post Typography as a label that encompassed our collaborative visual work. We began about six years ago (while still at MICA), doing projects after work and on the weekends--- mainly poorly-paying jobs like concert posters and band shirts. Within the past couple of years we started gaining some recognition within the design and art worlds, as well as some higher-profile jobs. Our work has been included in a few nice design books and magazines, and we've been asked to give artist lectures at various colleges around the country. We both were able to quit our day jobs last year to focus on Post Typography full time. We do a wide variety of work from magazine/newspaper illustrations to logo designs, book covers, and websites.

CUR: There's been a mention on your website about some 7" records coming in 2008. What can audiences expect on these new recordings, especially in light of Ragged Rubble's success?

BW: We have two 7"s coming out this Spring. The 7" on Toxic Pop Records features two unreleased songs from the Ragged Rubble recording session, Catalogs and Bored Meeting; and a remix of I Was So Bored I Wanted To Hang Myself on the Dancefloor on the B-side. Our friend Rowen Frazer did the remix, and it sounds great--- it's catchy and dancey, but not your typical remix.

The other 7" on Terra Firma Records will have a brand new recording of Luxury Condos For The Poor on the A-side and two new songs on the B-side. We've wanted to re-record Luxury Condos for the past year, because we play it much better now. This is the extended version of the song and the definitive recording of it.

These guys are playing at UMBC on April 11th, but they have a bunch of dates this month. Check out their MySpace for more deets.